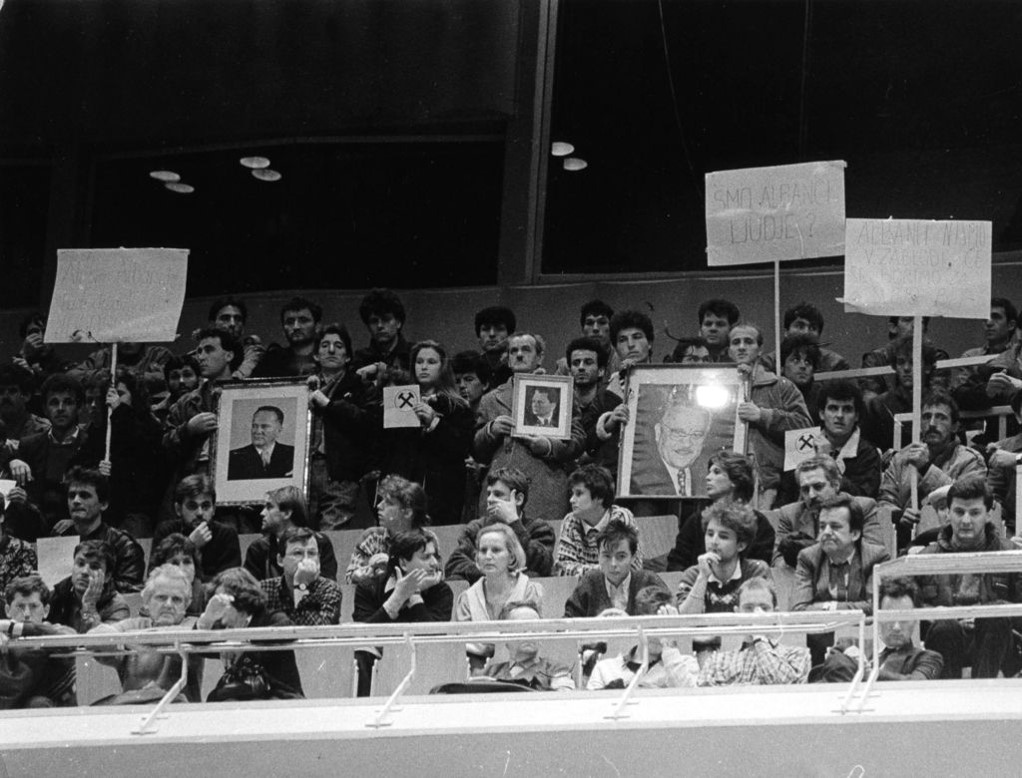 The idea for a project exploring the social history of Yugoslav Albanians during socialism generally, and the experience of migration in the socialist republics of Slovenia and Croatia in particular, first emerged during a previous research project, Between class and nation: Working class communities in 1980s Serbia and Montenegro (FWF project no: P27008)

In the context of that project, I have written that while Kosovo is a perennial trope of Serbian (and Montenegrin) historiography (and political histories of the late-socialist period recount Milosevic’s rise to power via Kosovo ad nauseum), very little Yugoslav social and cultural history deals with Kosovo and Yugoslav Albanians empirically. How might researchers then approach Kosovo and the diverse (though often tumultuous) Yugoslav Albanian experiences of socialism in these terms – actually existing socialism in an actually existing place?

In terms of labour history, the kind of methods deployed to examine Serbia and other socialist republics in the 1980s by Goran Musić and myself for that project fell short with regard to Kosovo. The coercive conditions in the autonomous province after 1981 meant that the framework we used to explore working class communities comparatively in places like Zrenjanin, Rakovica and Priboj would fall short and be even more partial if attempted in Suva Reka, Prizren or Peja (though see research by Pieter Troch focusing on Mitrovica)

Isabel Ströhle correctly observes that the historiography prioritizes mutually exclusive Serb-Albanian (and perhaps Macedonian-Albanian) historical claims and antagonisms. To sidestep this, the project shall concentrate on the Yugoslav northwest – the developed socialist republics of Croatia and Slovenia. Rather than focus on the Belgrade-Prishtina axis, the strategy employed in this new project is to examine some of the diverse Albanian experiences of Yugoslav socialism through a focus on labour migration to the northwest.

The presence of Albanians from Kosovo and Macedonia in contemporary Slovenia and Croatia is rather ubiquitous, most often represented by the stereotyped figure of an Albanian baker, sweetshop owner or jeweller. Despite this ubiquity however, the intra-Yugoslav migration and subsequent experiences of Albanians living and working in the Yugoslav northwest has not been systematically researched (with some notable exceptions of course, notably work by associated researcher Rina Geci and Marijeta Rajković Iveta on Kosovar migrants in Zagreb, and a recent chapter by Ana Kladnik on confectioners in Slovenia). [1]

A number of documents I encountered in historical archives in Serbia and Croatia further piqued my interest. I read these in 2017-2018 alongside Catherine Baker’s recent treatise where she convincingly explicates that the Yugoslav region is not ‘external’ to race and stresses that alongside Roma, Albanians were the Yugoslav citizens who found themselves most ‘exposed to racialized practices of Othering that resembled Western European cultural racism. [2]

For example, in 1987 in Rijeka, municipal authorities observed that economic migration of Yugoslavia’s Albanian population was constantly growing with Albanians being the ‘most numerous migrants’ in the region. The municipal authorities claimed that the Albanians’ ways of working and living there were ‘closed in comparison to [Northwest Croatia].’ Allegedly, ‘problems of interpersonal relations with the local population required more careful monitoring than had been conducted hitherto’. [3] The municipal authorities were suggesting that Albanians were culturally separate and tended to not participate in the local institutions of self-management and the party-state thus resembling the kind of cultural racism common in the post-war experience of migration to Western European societies.

With the official (federative) Yugoslav interpretation that the 1981 demonstrations in Kosovo were ‘counterrevolutionary’ and an illegitimate expression of nationalist excesses, anti-Albanian sentiment across the country grew and security services followed the activities of potential ‘irredentists’ closely. Croatia was no exception in this regard. The north-western areas of the socialist republic (Istria and Kvarner), were particularly important locations for Yugoslav Albanian migrants drawn to the area to due favourable economic conditions (tourism, industry), many of whom maintained connections with Albanian transnational networks in Western Europe. Although Kvarner and Istria are synonymous with robust ‘brotherhood and unity’ and an openness to outsiders, normative multiculturalism ran parallel to an ambivalence towards and indeed ‘widespread resentment’ of incomers from the Yugoslav south. [4] Tens of thousands of records of the local and state security services suggest systemic harassment at an institutional level. ‘To the Northwest!’ attempts to account for both cultural racism and animosity towards Albanians as well as sources of solidarity and an alignment of political interests that existed between Yugoslavia’s Albanians and sections of Croatian and Slovenian society, particularly during the late 1980s in the context of growing fears of Serb hegemony with the meteoric rise of Milošević.

While the historical archives can provide insight into discussions taking place amongst regional and state security services, local authorities and in workplaces, extensive oral history interviewing will be undertaken in an attempt to gain perspectives into the ways in which Albanian labour migrants and their families – business owners, social sector workers and their families – interpreted and responded to the experience of migration and their shifting position in society in Croatia and Slovenia.

In December 2020 the project researchers presented the project at the University of Graz (via Zoom). Here is the recording: