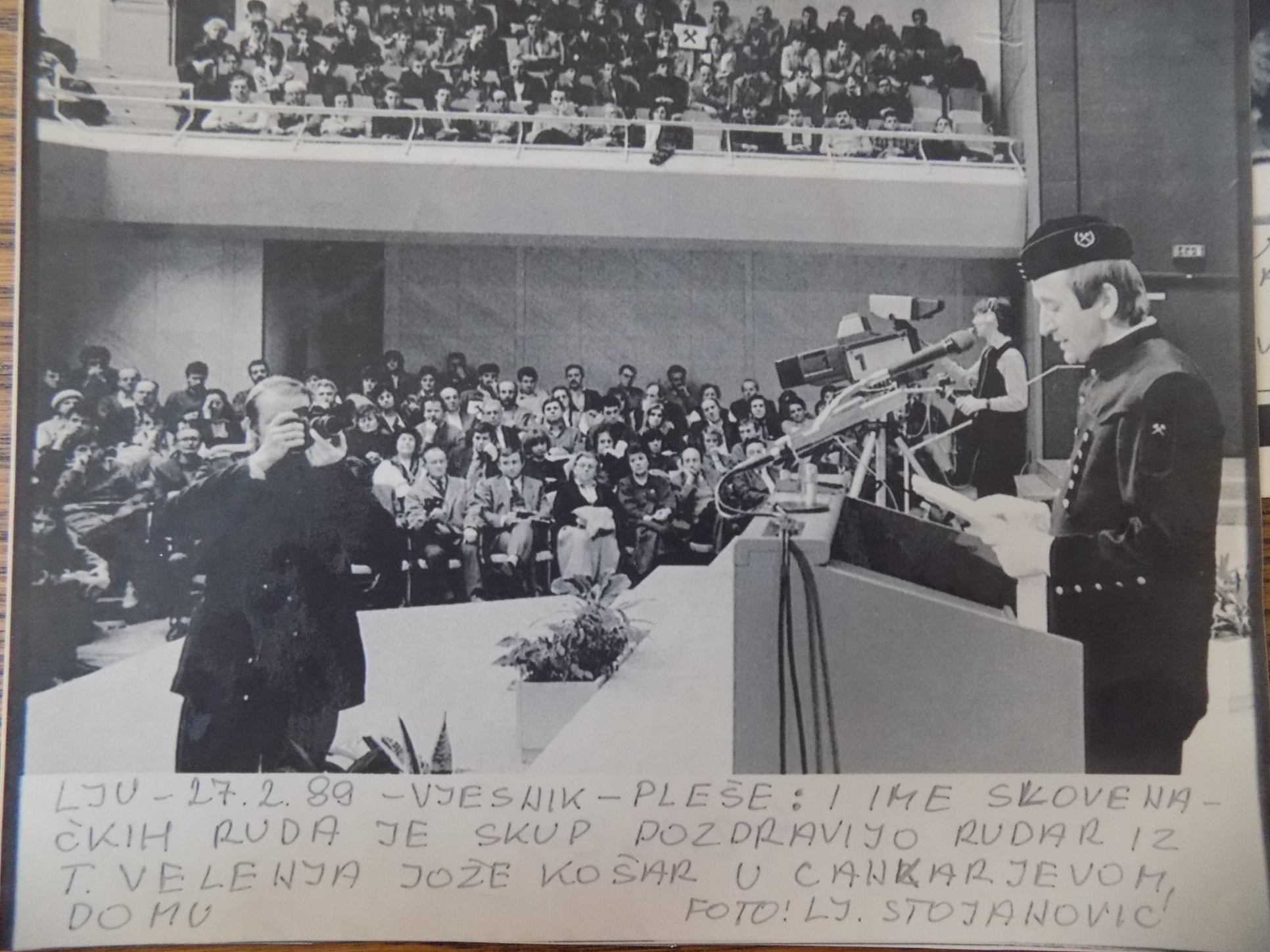 Besnik is an Albanian migrant from Macedonia living in Slovenia for more than 30 years. I had the opportunity to meet him in February 2020 while doing a radio broadcast for Radio Študent, an independent radio station in Ljubljana. At the time, I did not have much knowledge about the Albanian community in Slovenia, so meeting Besnik was very insightful and I was lucky to be able to conduct a quick fieldwork before the pandemic started. While the broadcast at the time featured interviews with four Albanian migrants, I will present only Besnik’s story in this text (the full broadcast in Slovene is available here: https://radiostudent.si/družba/južni-vetar/albanci-v-sloveniji).

We spoke on a warm February afternoon, sitting in a cafe terrace on the Ljubljanica river bank in the socialist-era neighbourhood of Moste, a multiethnic, Yugoslav-era suburb typical of Ljubljana. Moste is located in the vicinity of Štepanjsko naselje and the more famous Fužine, locations synonymous with socialist-built high-rises inhabited by čefurji (a derogatory term for Yugoslav migrants in Slovenia, somewhat re-appropriated in the last decade).

Although he permanently moved to Slovenia only in the late 1980s, Besnik’s parents and even grandparents lived and worked in Ljubljana from the 1960s onward. He is familiar with his family history in Slovenia and was keen to speak about it, indeed he did so with pride. Quite soon after we started talking, Besnik mentioned his grandfather Sherafedin being the one who‘started it all’. He spoke of his grandfather frequently and in superlatives, sometimes using the term ‘diplomat’. Diplomat was not a designation of his profession but rather an illustration of how well-respected and connected he was in Ljubljana where ‘everybody knew him’. While Besnik did not state the exact circumstances of his grandfather’s migration to Ljubljana, it was quite obvious that at first, he came alone, perhaps as a seasonal worker and only later did the rest of the family join. They first visited during each winter and summer holiday, then Besnik’s uncle moved with his family, and finally Besnik’s parents in the late 1980s permanently migrated to Ljubljana.

Being a ‘diplomat’ meant that Besnik’s grandfather Sherafedin had connections most of the other Albanian migrants at the time were lacking. Those ‘connections’ did not fall from the sky, rather grandfather Sherafedin fought for them. Quite literally. During the Second World War, he was mobilized, Besnik explains, and sent to the Srem front. Being a Yugoslav partisan brought him a degree of respect after the war and was beneficial in building a life in Ljubljana. For various reasons Yugoslav Albanians were underrepresented in the partisan movement, which is one of the reasons why the Yugoslav state authorities suspected them of disloyalty towards the Yugoslav project.[1] Sherafedin did not entirely share this destiny in Ljubljana, however. Although forcefully recruited, he was afterwards regarded as a deserving former soldier, which opened many doors for him.

One of such doors that needed opening was the launching of a family business. In 1978, Sherafedin opened a premises near the busy Ljubljana train station, and began selling burek. According to Besnik, it took one and a half years for the construction of the premises, and the family resources were pulled together. The bureaucracy was vast and the procedures lengthy. Being a ‘diplomat’, Besnik’s grandfather was assisted with gaining construction documents and operational permission from the authorities with the help of his acquaintances and ‘connections’. The feature of informality is important here. Sherafedin was able to construct business premises and start operating the business since he had a partisan past. Albanian business owners in Yugoslavia without this symbolic resource used different solutions to ‘speed-up’ the process.[2]

After the construction of the business premises, most of Besnik‘s extended family started visiting Ljubljana regularly. Besnik remembers he was a child at the time but he often helped with the business by completing simple chores, especially when he became a teenager and the family opened a cafe serving drinks and sweets.

Ana Kladnik has demonstrated how in the case of Velenje, Albanian fast-food joints frequently complemented the incomplete urbanization. Where the social sector could not provide for the catering facilities in newly urbanized neighbourhoods, Albanian hospitality businesses often filled the gap.[3] One such example is Štepanjsko naselje in Ljubljana, constructed in the 1970s and 1980s and now the most densely populated place in Slovenia with 11,000 inhabitants per km2.[4] This is where Besnik’s uncle opened his burek shop in the 1980s.

At the time, Yugoslav migrants moving into such neighbourhoods coming from Bosnia, Serbia, Kosovo or Macedonia were often collectively regarded simply as ‘južnjaki’ (‘southerners’) by the majority Slovene population. It is later on, in the late 1980s that one’s ethnicity started to become increasingly salient not only for Slovenes but even for the Yugoslav migrants themselves. The tensions in Slovenia were never as raw as elsewhere in Yugoslavia, still ‘there were conflicts’, Besnik explains. At the time of Slovenian independence, Besnik was in his early 20s. I could see that looking back, he had mixed emotions regarding that period. He often repeats that his and that of his close family’s homeland is Slovenia, and states that he loves Slovenia. He does so almost in an excessive manner, pointing to his adoration of the oberkrainer musik and other ‘Slovenian hallmarks’. However, every so often he presents a different perspective. When talking about the dissolution of Yugoslavia, it is evident that he feels Albanians were betrayed by the Slovene authorities, and were wrongfully treated the same as other čefuri.

Many problems he mentions were indeed common for the broader ‘Ex-YU’ community in Slovenia, yet Besnik repeatedly emphasizes the differences and hierarchies among them, especially in regards to the loyalty of Albanians to Slovenia and its people. Correctly gauging that I am too young to remember, he explains the political sympathies being strong between Kosovo Albanians and Slovenians in the late 1980s and early 1990s. He recalls public announcements being transmitted on the national radio, calling ‘brother Albanians, leave the barracks, do not serve the occupier [The Yugoslav People’s Army]’. While sincere about what he perceives as a Slovenian-Albanian bond, he also voices some reservations. For instance, he sees the Albanians as far more pro-independence than other Yugoslav migrants in Slovenia, yet he adds Albanians were unjustly put in the same category – čefurji.

Besnik recalls many empty promises, including Janez Janša and Igor Bavčar not holding their word of granting citizenship to some Albanians who, following the independence referendum, deserted the Yugoslav Army barracks. Some of the Albanian migrants were also among the ‘erased’, and thus shared the fate of more than 25,000  former Yugoslavs in Slovenia who were made legally non-existent in 1992.[5] ‘In Zalog, [another neighbourhood of Ljubljana] Albanians were evicted overnight from the workers’ accommodation [samski dom] in order to make room for Slovenian soldiers’, Besnik says, before abruptly changing course with more positive remarks as if trying not to be too critical.

The change of the political system had impacted the socialist ethnically-mixed neighbourhoods as well. Besnik mentions that he lived in a very mixed community, ‘a small Yugoslavia’ as he calls it. He remembers customers of different Yugoslav backgrounds, Serbs, Muslims, Croats, coming to a cafe owned by his family at the time, and recalls customers occasionally starting a fight in the premises. He goes on to explain how hard it was to intervene in such situations, because very easily the Albanian café owners could be regarded as supporting one or the other side. Again, he resorts to the trope of Albanian loyalty towards Slovenia emphasising that no customer of the café was ever allowed to hurt the ‘natives’, meaning Slovenes.

During the postsocialist transformation of the 1990s, Besnik argues, many Albanians struggled with bureaucracy. He describes how Albanians were not prepared for new, stricter rules for running a business and it seems that the informal aspect of a socialist small business changed its logic. However, he avoids attributing all of the new problems to the new legal framework and practice, but suggests a change in attitude of the Slovenian public at large. They were increasingly associating Albanian small businesses with mafia, Besnik stated, while adding that ‘the feeling was that everybody hates us now’. Still today, having ties to mafia is a common accusation voiced against the Albanian community in Slovenia (and elsewhere).

Besnik maintains ties to his birthplace in Macedonia and regularly visits his village in the summer with his family. While a large portion of Macedonian Albanians migrated to economically more developed regions since the mid 20 century,[6] Besnik warns that being a migrant in Slovenia is not as prestigious as it once was. When visiting Macedonia today, ‘it is only Germany and Switzerland that count’ he explains, remembering how even a mere Ljubljana license plate used to trigger respect from bystanders in Macedonia or Kosovo. We were seen as cultured gospoda, he concludes.

[5] Kogovšek Šalamon, Neža, Brankica Petković, Jelka Zorn, Sara Pistotnik, Uršula Lipovec Čebron, Veronika Bajt, and Lana Zdravković, The Scars of the Erasure : A Contribution to the Critical Understanding of the Erasure of People from the Register of Permanent Residents of the Republic of Slovenia. Edited by Neža Kogovšek Šalamon and Brankica Petković. 1st ed. Ljubljana: Peace Institute, 2010.