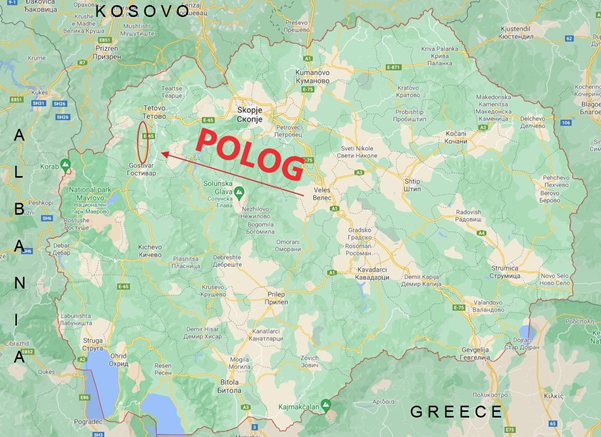 Polog is a densely populated stretch of flat land in the western part of North Macedonia. Inhabited predominantly by Albanians, it is oriented along a north-south axis and confined by mountains to the west and east. On the western side of Polog, the Sharra mountains rise up to 2700 meters high, and separate N. Macedonia from Kosovo. While most of the land in Polog is fertile and used for farming, there are quite a few cities and towns as well, most notably Tetovo in the middle of Polog, and Gostivar 30 km to the south. I visited this area in June to undertake fieldwork for the project.

More than Gostivar and Tetovo, I was interested in the villages in between. There are a dozen of them and they form a continuously populated belt between the two towns. Terming them ‘villages’ however, can be deceiving since each of the locations is home to as much as 10 thousand inhabitants. The reason I intended to visit the area were the preliminary findings from the Ljubljana historical archives. In the municipal archival documents from the early socialist period related to crafts, Albanian ‘oriental confectioners’ (as they were termed by the Slovene authorities) appeared prominently. Among some 30 such confectioners, most of them were born in Pirok, one of the aforementioned villages between Tetovo and Gostivar.

During my visit to Pirok, it was not hard to establish contact with the locals. As the area is neither a tourist destination nor a transit point, I assume they do not see many visitors from outside. I was therefore an interesting newcomer upon arrival at the cafe in the village centre. Quite soon, I was asked where I came from by another guest on the terrace. Being from Slovenia opened the door to a friendly and informative conversation, a situation I experienced regularly in my fieldwork both among Albanians from Macedonia and Kosovo.

After trying a few words in Albanian, Qerim, a gentleman at the other table began speaking to me in Serbo-Croatian. He was an elementary school teacher and was keen to talk about Pirok’s history and its people. He recalled how the inhabitants of Pirok had indeed massively migrated to Slovenia in the past. Other villages in Polog, he added, contributed a great number of migrants as well, but not always to Slovenia, while Pirok and nearby Dobri Dol were really heavily tied to Slovenia as a migratory destination. Trbovlje, Ljubljana, Kranj and Ilirska Bistrica were the Slovenian towns most mentioned in the conversation.

As most of the migrants worked in family owned sweet-shops, usually selling ice-cream, I wanted to know how Qerim understands this common occupational specialisation among Albanian migrants. A few other locals sitting at the neighbouring tables engaged in the conversation as well. Of course, there was no definitive answer to my question but a tradition of seasonal labour mobility apparently existed already before the second World War. The gentlemen mentioned both Istanbul and Romania as popular destinations at the time, and pečalba (a term for seasonal migration) was also mentioned. While emphasizing that pečalba was a Macedonian term, Qerim did not provide an Albanian substitute for it, though I knew from literature that it is called gurbet among Albanians.[1]

Ice-cream and coffee in the cafe were on the house this time and I travelled a few kilometres south to Dobri Dol – ‘sweet village’, as it was characterised by Belgrade paper Politika in 1967[2]. I stopped at the only place where one can eat in Dobri Dol in this time of the year if one wants to avoid burek. The owner of the small and empty pizzeria settled in Dobri Dol some 15-20 years ago. Before that, like many other Albanians in Polog, he migrated to the Yugoslav northwest, first working at a ćevabdžinica in Maribor, owned by a local from Dobri Dol, and was later employed as a manual labourer in (West) Germany.

“When I was in Maribor”, he recalled “that was the best period of my life, and leaving it was the biggest mistake I made”. Being born in Maribor myself, we recalled places we both knew. Among others, he talked about feeling included while there and not being a ‘true foreigner’ as he felt later on in Germany. He mentions going to a discotheque in Maribor. “Yes, we had a drink but we always entered and exited the disco as gentlemen”, he adds implying that they were never excessively drunk. While I ate pizza on the pavement in front of the pizzeria, he pointed at the surrounding houses and began explaining which belongs to whom. The houses are large, lavish looking and almost all appear to be empty. All are owned by Albanian migrants living and working in Slovenia. The houses are empty for most of the year, and are used only for a few weeks either during the New Year holidays or in the wedding season in the summer. The empty lavish new houses are a common sight in all of Polog and they speak to the extent of migration that Albanians in this area experienced in the last 100 years[3].

The 30km long stretch of villages between Tetovo and Gostivar is relatively small, yet archival material and oral history fieldwork in Slovenia suggest that most of the Albanian confectioners migrated precisely from this small area. In Pirok and Dobri Dol you can easily grasp their connectedness to Slovenia. You are welcomed by the locals on every step just for being Slovenian, you can see the empty houses of Albanian migrants now based in Slovenia, everybody has been there or knows many that settled in Slovenia permanently. While Slovenia is a strong signifier that bears important meaning for the villages in Polog, I strongly doubt that many of my Slovene compatriots are aware of this.